<< back to blog posts 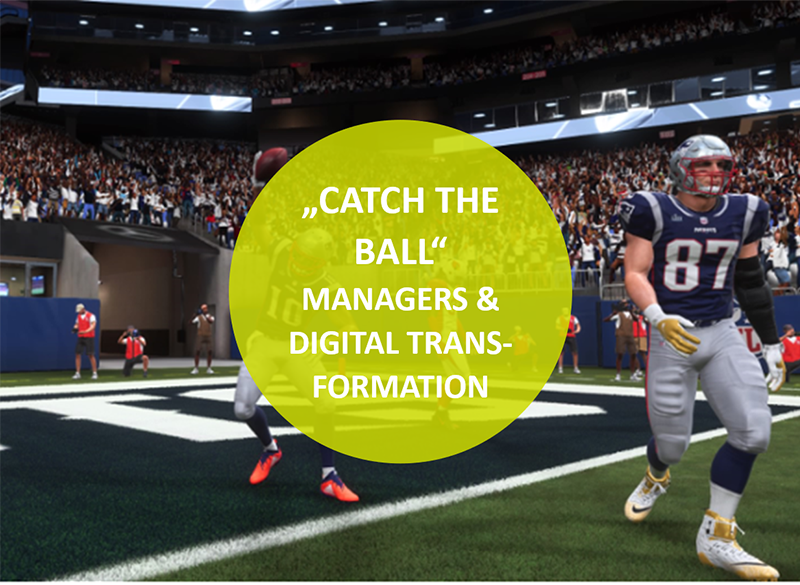 "Catch the ball" – Managers in the age of digital transformation

What are the similarities between the wide receiver in American football and the manager of digital transformation?

Almost every manager or entrepreneur in the German-speaking world is thinking about how digital transformation can take place in his company. 62% of companies believe that they are on an equal footing with their competitors when it comes to digitalization, but only 16% approach digitalization in a consistent and implementation-oriented manner. (Microsoft, 2017)

Technologies such as artificial intelligence are developing rapidly – generating new business from data becomes an opportunity to respond to radical market changes.

"Moonshots" – groundbreaking innovative projects such as those in Silicon Valley – are conquering digital markets and changing them radically.

But then there is also the inertia, the risk aversion and the belief of managers that the path taken so far will be sufficient. Digital transformation is not a question of technologies and skills, but of the leadership and attitude of entrepreneurs and managers.

When is the right time to consistently follow the path to digitalization?

Was it just a while ago when the order books were full – i.e. there was no need for change, or completely contrary the tension of the market situation, in which it was necessary to make every effort to stay ahead of the competition – the time for change has never really been right.

And then COVID-19 happened – and again, no time for that!

Trillions of Euros and Dollars are poured into the economy by governments, rescue packages are opened, familiar things break away – the situation creates room for new things.

But it also requires a new corporate culture, leadership qualities, speed, the eagerness to experiment and the willingness to take risks.

Managers of digital transformation can certainly be compared with the wide receiver from American football.

The strength of a successful wide receiver lies in the ability to find that narrow gap through the “liners”. The “liners” represent a familiar situation for managers – “stuck in the middle” – blocked by the opponent or sometimes their own structures, with little room for escape.

In our comparison, the ball corresponds to digitalization. The quarterback (the digitalization consultant) has the task of throwing the ball to the wide receiver, who catches it to make that vital score.

However, it remains the responsibility of the wide receiver to recognize his chance to run free in the confusing situation, without knowing for sure whether he will succeed.

Managers of digital transformation also need the ability to change direction quickly; managers who are willing and able to act and try out new things in this economically, politically and currently epidemiologically confusing situation; people with the will to perform and lead, who have the courage to dare things – knowing about the possibility of their own failure.

However, the manager or entrepreneur, our wide receiver, is someone who differs above all in that he can navigate his way in a confusing environment and remains capable of acting. He is the one who shoulders leadership in times of uncertainty.

His strategy enables the quarterback and the rest of the team to make the decisive move.

A manager is needed who takes the lead and ensures the success of the digital transformation.

Data is the company's treasure. The use of data allows the development of new business.

It is crucial to use the right technologies and digitalization methods such as artificial intelligence, scalable infrastructures or other open source technologies. Consulting with an expert can support the selection process.

Receivers need partners – quarterbacks. That means: There is trust in the team. Data scientists, technologists and business designers are equally motivated, supported by a clear vision and comprehensibly communicated goals.

The vision and clear strategic goals are the basis for the new digital business and the expected business value. Those who want to achieve long-term competitive advantages through digitalization must develop completely new solutions and business models, which often go far beyond the optimization of existing processes. Think different!

Are you a wide receiver and do you want to successfully implement the digital transformation in your company?

MISSION
We help companies to reduce complexity and
make better decisions based on their data! This results in new data services,
data products and digital business.